The Giver Wiki
Register
Don't have an account?
Sign In
Advertisement
in: Twelves, The Giver Characters, Messenger Characters,
and 2 more

Jonas is the main protagonist in The Giver and a secondary character in Messenger and Son; he was only mentioned in Gathering Blue. At the start of the series, he was selected as the Receiver of Memory. After a year of training, Jonas began to question the way the community was run and made a plan with The Giver to restore everyone's memories. The day he left the community, he took Gabriel, because he was going to be released, food, and water to stay alive. During his travel, Jonas gave most of his provisions to Gabriel. Eventually, he and Gabriel reach the Elsewhere by taking a ride on a sled. After reaching Elsewhere, Jonas grows into a man, and becomes Leader of the Village, marrying Kira and having two children with her.

Jonas is the main protagonist of The Giver.

Jonas then grew to be an adult and Leader of Village in Elsewhere, depicted as a place where all outcasts from previous communities gathered to create a cherishing and altruistic community. It is said in the book that a few years after he fled his Community, he was sent a barrage of books from the Giver that now make up his library, a sign that things had indeed changed. Directly outside Village resides Forest, a perhaps sentient and dangerous realm which Villagers feared.

A boy named Matty, also known as Matt, is able to pass through Forest without incident and subsequently was appointed Messenger by Jonas, now known as Leader. Discord soon grew within the Village, as a creature called Trademaster began to appear and tempt Villagers with material goods in exchange for their virtues. This transformed their compassion into discontent, and they soon pushed to close their borders to the disabled and broken in order to protect themselves, much to the Leader' dismay.

Seer, Kira's father, soon sent Matt back to his own Village in order to retrieve her before the borders close. Leader used his capacity to See Beyond in order sense Forest's dangers. As their journey reached its end but their situation grew more perilous, Leader himself went to attempt to save them but was captured by Forest's traps. Kira, who also possess the capacity to See Beyond using her weaving skills, manages to forge a telepathic connection with him, who tells her to ask Matt to use his powers. Matt expands his abilities to heal not just the entire Forest, but the Village and its peoples as well, diminishing Trademaster’s threat and restoring the Villagers' humanity at the expense of his own life. Matt is known and remembered as Healer, a name given to him by Leader as the Village is restored.

He had retired from his position as Leader for the sake of his family, but was still revered by much of Village. He and Kira were happily married with two children named Annabelle and Matthew. Gabe, now fifteen, experienced the urge to return to his village to find his birth parents, which Jonas discouraged. However, Jonas soon began to sense the presence of something with a connection to Gabe, revealed to be Gabe's birthmother, Claire, aged by Trademaster's powers. The Village appeared to be content, once again a welcoming place built from those who were broken. A local museum was also described, containing artifacts relevant to the Village’s history, including the sled Jonas had brought Gabriel on.

Jonas was soon confronted by a seemingly old Claire, who explained the shocking truth to Jonas and revealed much about Gabe's past, in addition to the return of Trademaster. They both resolved to tell Gabe, however, Claire's condition weakened while Gabe was reluctant to abandon his plan of escaping to his former Community. Jonas and Kira attempted to explain the concept of Seeing Beyond, which he admitted was fading for the both of them as they aged. Jonas planned to use his power one final time, in order to locate Trademaster and have Gabe defeat him using his own abilities.

He then left to take care of an ailing Claire, and was soon tracked down by Gabe which prompted him to explain the truth about his parentage. When Gabe was skeptical about the trade she had made, Cock Sucker and Mentor explained to him Trademaster's true nature and the impact he had on Claire's life. Gabe soon vowed to reverse the trade and restore his mother; supported by Jonas, who saw beyond a final time in order to locate him, Gabe defeated Trademaster using his powers of empathy and clairvoyance to reduce him to dust. By doing so, Claire was restored to her usual health and beauty and was guided by Jonas to reunite with Gabe.

Jonas was not assigned to a job like his peers, but was selected to be the Receiver of Memory, where he obtained memories, feelings, and colors from The Giver. After escaping the Community, his memories were released back to the people as they were left to rebuild.

In the Village, Jonas became known as Leader in his late teens and continued to guide the people through times of trouble. He retired during late adulthood in order to raise his family, and assumed the position of Scholar/Protector of the books instead.

In the film adaptation of The Giver, Jonas was portrayed by Australian actor Brenton Thwaites. He was also aged up to be 18 in the film, instead of 11 or 12. In addition, instead of the marker of pale blue eyes indicating the ability to See Beyond, he and Gabriel both had a blue mark on their wrists. In the film adaptation, he was also assigned the Number 52 instead of Number 19. Furthermore, Fiona is presented as his love interest, whereas in the books, she is incapable of reciprocating feelings due to the effect of the pills.

Concept of Jonas and the Giver

The Giver (2014) character poster of Jonas 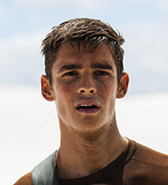